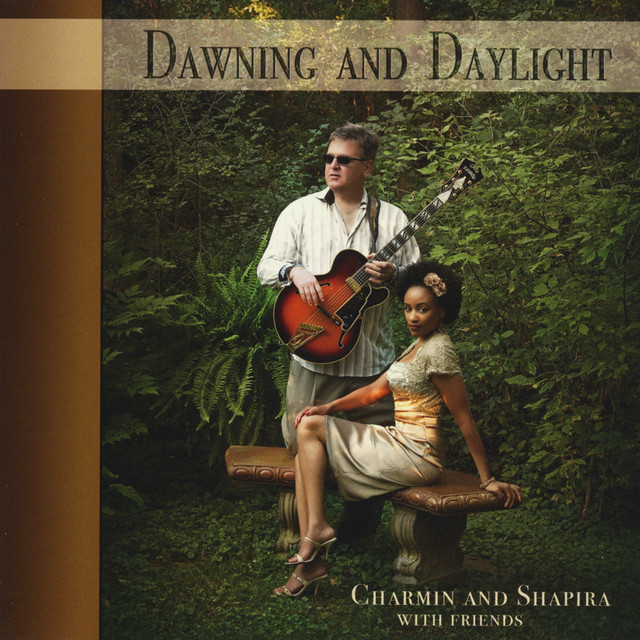 If you live in or near the Twin Cities, you are probably already familiar with the succulent duo sounds of songbird Charmin Michelle and guitarist Joel Shapira, the longstanding “Charmin and Shapira.” And if they are a new find, what a treat! As on their debut release, Pure Imagination (2005), on the new Dawning and Daylight they augment the ensemble with “friends” Paul Harper (tenor sax), Tom Lewis (bass), and Nathan Norman (drums), and this time, on two tracks, bring in Dave Schmalenberger on congas.

The cast is not the only similarity to the previous release: Again, Charmin and Shapira mine classics from the Great American Songbook; jazz standards from Wes Montgomery, Horace Silver, Monk, and Ellington; and a beauty from Gordon Jenkins, all brought to a high sonic standard by engineer Matthew Zimmerman at Wild Sound Studios. The principles similarly give us a high standard of artistry—Charmin’s pitch-perfect, buttercreamed storytelling; Joel’s wide-ranging, fleet-fingered, often delicate gymnastics.

The set kicks off on a blue note with Montgomery’s “West Coast Blues,” voice and guitar matched so cleanly that one hears two singers in unison until drums, bass and sax join in. Shapira and Harper establish their blues credentials quickly and Tom Lewis’s basslines offer vital, if subtle support. I’ve heard Charmin sing “Nica’s Dream” at her regular Fireside Pizza gig and it’s always a charmer (why don’t more vocalists cover this?). Here it’s taken as a warm samba buoyed by Schmalenberger’s congas, the band taking their upbeat turn, inviting everyone to the dance floor. Shapira’s solo spins joyfully.

Joel and Charmin open “I Remember You” with a delicate verse and continue in duet with a gentle swing that highlights Shapira’s Joe Pass influences and Charmin’s nuanced interpretative style. Shifting to the swirls and curls of “Caravan,” sax and rhythm section take the spotlight, along with the more assertive side of Shapira. Lewis and Norman add urgency as the caravan careens across the desert.

Charmin’s horn-like phrasing and Shapira’s bop-grooved guitar elevate “In Walked Bud,” while drummer Nathan Norman steams through the break. Schmalenberger returns as conguero on a slowed-down, Latinized “You and the Night and the Music,” Charmin imparting just the right tilt toward sultry, Joel braiding dark threads and Harper hinting at something mysterious. There’s no rhythmic complacency with Lewis, Norman and Schmalenberger in the house, and the musicians are well described by the lyric that gives the CD its title-- "....until the pale light of dawning and daylight, our hearts will be throbbing guitars..."

Gentle sophistication returns on “I Thought About You,” from Charmin’s sweet swing (and extended lyric) to Harper’s mild-mannered boppish phrasing and Shapira’s understated accompaniment. Gordon Jenkin’s “Weep No More” is a perfect vehicle for Charmin’s reverence for lyric and her pairing with (only) Shapira’s balladry. Joel’s solo is surely one of the album’s most artful moments. Charmin brings many artful moments to “Beautiful Love,” which also features a deep-throated bouncing solo from bassist Tom Lewis. Another kiss of samba infuses the all-instrumental “I’ll Remember April,” from the melodic sway of Paul Harper’s sax to the sunny chords (and dancing solo) from Shapira, to the popping insertions from Nathan Norman and underlying pulse from Lewis.

The set closes with the lovely “Never Let Me Go,” Joel soloing through several virtuosic verses before Charmin enters midway, taking some liberties with melody that melt like butter into the singing lines of guitar—a duet that in its simplicity tells us everything we need to know, and hear, about the musical partnership of Charmin and Shapira.

Dawning and Daylight is available on CD Baby (www.cdbaby.com). Visit Joel Shapira’s website at www.joelshapira.com. More on Charmin Michelle at www.charmsongs.com. The CD release party will be held at the Artists Quarter on April 22nd, 9 pm.