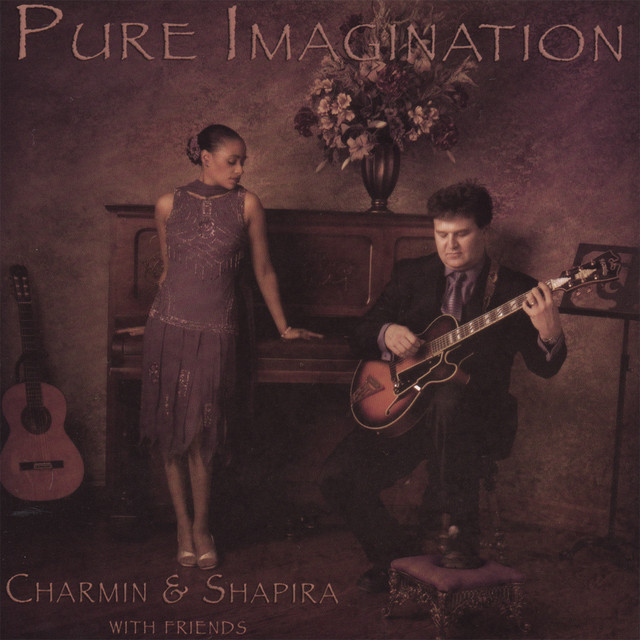 Ginger and Fred, Ike and Tina, even Lucy and Ethel—great entertainment has often come in pairs. Locally, vocalists Charmin Michelle and guitarist Joel Shapira are one of the stellar duos of the decade, a collaboration documented on their 2005 recording, Pure Imagination. On Tuesday night, August 14th, Charmin & Shapira “and friends” perform at the Dakota Jazz Club in downtown Minneapolis. Other duo gigs this month include the Times (August 18th), Fireside Pizza (August 22nd) and Cue at the Guthrie (August 31st).

Charmin Michelle sings with “taste and understatement, swing and savoir faire, grace and grooves, intimacy and panache” (TC Music Net). Born in Birmingham, Michelle moved to Minnesota as a young child. Although the Land of 10,000 Lakes has been home ever since, her experiences have taken her around the world. With the promotion of organ legend “Captain” Jack McDuff, Michelle toured Europe with internationally known pianists Mulgrew Miller and Kirk Lightsey in 1997. Since 1998, Michelle has performed in jazz festivals throughout Europe, and in the past year has had several tours in Spain.

Locally, on any given night she can be found on stage at the Dakota, Rossi’s Blue Star or anywhere that promotes top-flight jazz. She has had a long-standing Monday night gig at Fireside Pizza with Denny Malmberg, and Sunday nights often find her at the Cinema Ballroom with the Jerry O’Hagan Orchestra. In addition to her duo gigs with Joel Shapira, she also performs frequently with Doug Haining and the Twin Cities Seven. On her three earlier recordings—Your Eyes (Zimboy, 1994), Destination Moon (CM, 1998), and Hot (CM, 2001), she covered tunes of Billie Holiday, the Great American Songbook, blues and bossa. Tom Surowicz described Destination Moon as an “an aural charm bracelet filled with swell songs that you haven't heard too often.”

Guitarist Joel Shapira studied at the Berklee College of Music in Boston and at the Mannes School of Music in New York City, as well as with Tal Farlow, Joe Pass, Sharon Isbin, and Anthony Cox. Active in the Twin Cities for many years, he co-leads his own small jazz groups (including “Triplicate”) as well as playing classical duets with saxophonist Paul Harper and providing the instrumental half of Charmin & Shapira. He has frequently appeared with Dean Magraw, Kevin Daley, Pete Whitman, John Devine, Doug Little, Signe Hensel, Judi Donaghy, Vic Volare and Larry McDonough, among others. His business Sunset Park provides music for weddings and private events. Joel also teaches guitar at the Rymer-Hadley Fine Arts Center.

With Pure Imagination (Charm Songs, 2005), Charmin & Shapira bring nearly ten years of collaboration to eleven diverse tunes largely drawn from the Great American Songbook. Four tracks feature simply the vocal/guitar duo; 6 tracks feature an all-star quintet with the additions of Paul Harper, Tom Lewis, and Nathan Norman; and Michelle sits out the final track and lets the instrumentalists stretch out on their own. Compared at times to Billie Holiday and Nancy Wilson, Michelle’s trademarks are clear tone, precise diction, and true pitch; she has a beautiful lower register and wide comfort zone; every track carries her personal, gentle imprint. [click here for a Jazz Police review]

A few years back, Tom Surowicz noted in the Star Tribune that Charmin Michelle’s “understated art is more about gentle persuasion, precise storytelling and easy swing.” Michelle never tries to blow out the speakers. Rather her efforts are directed to interpretation and nuance: "I've always admired singers who can belt out tunes, but I know I'm not a belter," she told the Minneapolis Star Tribune. "So I try to use dynamics and emotion to get my point across. And I choose tunes where the lyric and melody has a lot of meaning. That way I can express a lot of feeling without having to shout it out.” Shapira is her perfect foil, for he too is all about nuance, creating a warm breeze to billow around the velvet pipes.

Running out of steam as summer wanes? Come in to the Dakota Tuesday night, relax, and face the music with Charmin and Shapira! They’ll be joined by saxman Paul Harper, bassist Tom Lewis, and drummer Nathan Norman.