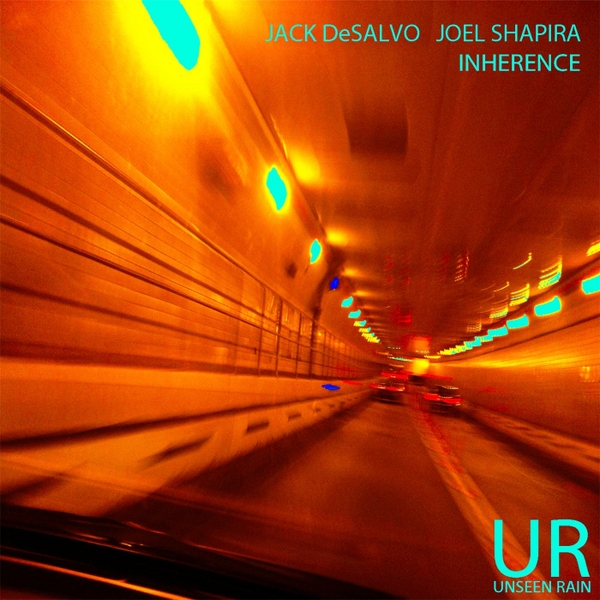 Return of the Student: CD captures chemistry between a Master and his former apprentice
Bill Stieger
The Villager

Long-time Mentor. Every artist worth his chops has had one if not more. Whether it is through the inspiration of another artists work or the time spent in a personal apprenticeship, every artist stands on the shoulders of his predecessors.

For a former apprentice to return to his mentor and collaborate is rare, but that is exactly what Highland Park guitarist Joel Shapira has done with his former teacher, Jack DeSalvo. Shapira and DeSalvo have recorded a new album of jazz guitar duets titled “lnherence”. Its release will be celebrated with a concert from 7:30-9:30 p.m. Wednesday, February 5, at the Black Dog Coffee and Wine Bar, 308 Prince St. in St.Paul’s Lowertown.

“I met Jack in Tower Records in Greenwich Village,” Shapira said. “Great musicians worked and hung out at Tower. Right away, just by talking, I could tell that ]ack and I had a lot of musical common ground. We both played with our fingers, like flamenco guitarists, instead of using picks. We shared a love of classical music as well as jazz. I ended up studying guitar and music theory with Jack. He taught me about the commitment involved in playing jazz, especially in New York City, where great players were a dime a dozen.”

Shapira credits social media for bringing about the reunion with his former mentor. “I hadn’t had contact with Jack for 20 years,” he said, “but the Internet changed everything. A couple of searches and—boom! — there he was. l’d chat with him about going out to New York to record duets with him at his brother's studio in New Jersey.”

“It was fantastic to see Joel again after all those years,” DeSalvo said during an interview over telephone. “Musically, Manhattan isn't the place it was 20 years ago. Many clubs have closed and work is much scarcer. A lot of the good jazz these days is played in Brooklyn.

“l was glad to hear from Joel and to learn that he's thriving in the Twin Cities, which I hear has some very talented jazz players.”

Due to scheduling and ﬁnancial constraints, Shapira and DeSalvo had just one afternoon to record “Inherence” with no time for rehearsals. Four of the recordings 10 selections are DeSalvo originals. Another four are Wayne Shorter compositions—“Fee-Fi-Fo-Fum” “House of Jade” “Virgo” and “Nefertiti”— revealing the guitar duo’s reverence for the saxophonist who invigorated the music of Miles Davis and Weather Report. The remaining two cuts, “Joja” and “January East,” are spontaneous, improvisational pieces that reveal the seemingly paranormal interplay that can happen between two accomplished artists.

“Inherence,” which was released on the independent label Unseenrain Records, is “the product of one four-hour session,” Shapira said. “It was a challenge. But I was so excited to be in New York and recording with Jack that the occasion reached a sort of spiritual vibe. For me, it felt like the full circle element on the music we had worked on years ago.

“A quality recording, made under that kind of time constraint, brought out what I feel is the best in jazz musicians. No rehearsal. Let’s just do it. Let’s play! “lnherence” captures more of that improvisational quality than anything I’ve ever played.”

Shapira grew up in the Como Park area of St. Paul and graduated from Como Park High School. He took guitar lessons as a child and knew from an early age that he wanted to make music his
profession.

“My father had some jazz recordings,” he said, “Charlie Parker and Thelonious Monk records. I was taken with jazz from the start.”

Shapira studied at Boston’s Berklee College of Music and later transferred to the Mannes School for Music in New York City. “New York was the best city to start performing as a professional,” he said. “And, of course, studying with Jack was the icing on the cake.”

Since Shapira’s return to the Twin Cities 16 years ago, he has played and recorded with many of the Twin Cities’ best jazz musicians. He has recorded six CDs and has established a lucrative business performing at weddings and corporate events. He regularly plays at the Dakota jazz club in Minneapolis with singer Charmin Michelle and teaches at the St. Paul Guitar Studio.

Michelle said she never tires of working with Shapira. “The most exciting part is planning our arrangements at our weekly rehearsals” she said. “Joel is fun to work with because he's always working to keep the music fresh. And, of course, he’s a very fine guitarist.”

“It isn’t all sweetness and light,” Shapira said. “Playing creative music for a living can be difficult. But I’m making it. I find ways to keep busy and make enough to pay the bills and keep going. But my goals have always been artistic. It sounds like a cliché, but I want to become the best musician I can possibly be. And having had Jack as my mentor, and now as a recording partner, moves me closer to that goal.”

Acclaimed veteran Twin Cities jazz guitarist Dean Granros will be sitting in for DeSalvo at the CD release concert on February 5. Admission is by donation, with $5 suggested.