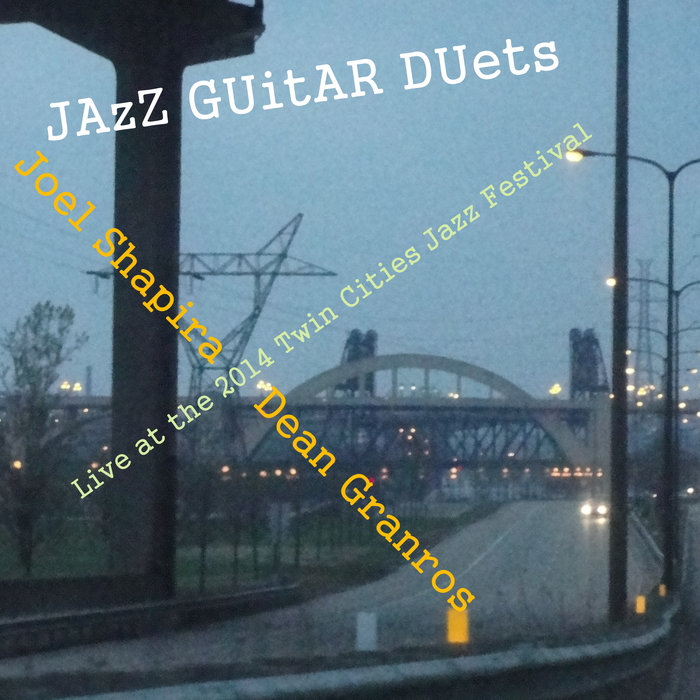 About a year ago, Twin Cities' guitarist Joel Shapira needed a stand-in for his New York-based partner Jack DeSalvo, who was unable to make the trek to Minnesota to celebrate their new recording, Inherence. For the CD release gig at the Black Dog, Shapira found a willing "sub" in Minnesota's own guitar guru, Dean Granros. The result was not a duplication of the Shapira-DeSalvo magic, but a new partnership, and a stunning one at that. Since that night, Shapira and Granros have furthered their collaboration, now captured as Jazz Duets: Live at the 2014 Twin Cities Jazz Festival (Art Bunker Recordings). No stand-in needed this time - Shapira and Granros will return to the Black Dog on January 9 (8 pm) to celebrate the CD release at its point of origin.

St. Paul native Joel Shapira studied at the Berklee College of Music in Boston and at the Mannes School of Music in New York City, as well as with Tal Farlow, Joe Pass, Sharon Isbin, and Anthony Cox. Active in the Twin Cities for the past 16 years, he leads his trio and quartet, provides the instrumental half of the popular duo, Charmin (Michelle) and Shapira and coleads their expanded Charmin and Shapira and Friends. He's led the ensembles Triplicate and Pooches Playhouse and frequently appears with Dean Magraw, Pete Whitman, John Devine, Vic Volare, and a who's who list of area vocalists. He will debut a new quartet later this month at the Black Dog, dubbed Bottomless Pit with Pete Whitman, Tom Lewis and Eric Kamau Gravatt. Joel's previous recordings include two releases with Charmin Michelle (Pure Imagination, Dawning and Daylight), his quartet debut (Open Lines), two albums with Triplicate (Triplicate, Day and Age), and the guitar duo with Jack DeSalvo (Inherence).

Dean Granros studied music theory and composition at the University of Minnesota from 1970-1972, and studied composition with John Gessner at MacPhail Center for Music in 1973. Concurrent with those academic studies, he served a lengthy apprenticeship in jazz and blues, playing nightclubs such as the old Blue Note in North Minneapolis, the Extraordinaire, and the Downtowner. He was a co-founder of one of the Twin Cities seminal experimental jazz groups, The Whole Earth Rainbow Band in 1970, and in 1974 he created and wrote for Lapis, an ensemble dedicated to exploring composition with structured improvisation.

From 1985 through 1993, Dean joined former Weather Report drummer, Eric Kamau Gravatt, in the high energy post-bop band, Kamanari. He co-founded the progressive and virtuosic improvising trio F*K*G in 1995 with saxophonist Scott Fultz and drummer Dave King. In 2002, he joined George Cartwright’s band Curlew, touring the Eastern U.S. and playing the EdgeFest in Ann Arbor, MI; he was featured on Curlew’s much lauded 2003 Cuneiform release, Mercury. Also in 2003, Dean began playing Wednesday nights at the Artist Quarter with the exploratory quartet, How Birds Work. Granros continues to perform locally with groups such as Starry Eyed Lovelies (with Mike Lewis, Anthony Cox and Dave King), FKG, and How Birds Work, as well as his new double guitar quartet with Zacc Harris, Chris Bates and Jay Epstein and the new duo with Joel Shapira. His ensemble "AntiGravity” explores new directions in improvisational composition. Over his career, Dean Granros has performed extensively at concert venues like the Walker Art Center and First Avenue, and his music has been featured on MPR, KBEM, and KFAI radio.

Noted Don Berryman, “Dean Granros is a musical Jekyll and Hyde, mild mannered when he takes the stage and settles into the groove but eventually he will play like a madman taking the music where no sane person would and then makes it beautiful when he gets there.”

The Shapira/Granros duo was one of the opening acts of the 2014 festival, the first of the night (June 26) at the Black Dog. Dave Kanuth was on hand to record the set, turned over to Twin Cities pianist/engineer Benny Weinbeck for mixing. Just the two guitars, but who plays what? Think of this as a four-handed guitarist, a melding of two artistic minds that is so seamless that it really makes no difference what solo or what counterpoint comes from which musician. The duo performs 7 familiar standards as a series of extended improvisations that have the spontaneity of in-the-moment creations. There's no rush, no urgency to reach resolution, with each track ranging from 6-11 minutes of thoughtful conversation.

Joel and Dean start in deep blue with Ornette Coleman's "Turnaround," one guitar taking the melody and the other providing background counterpoint, and vice versa. It's a virtuosic modern baroque, at times argumentative. They shape "Stella by Starlight" as an intricate slow dance, ethereal despite its complexity, at times suggestion a string quartet rather than duo. Rodgers and Hart's "Have You Met Miss Jones?" is upbeat and bouncy, highlighting each guitarist's fleet-fingering as they stray far from the melody before pulling it back to shore.

Although faster paced than usual, "You Don't Know What Love Is" is a dark, multi-layered interaction, while "Oleo" provides a lot of fun for both guitarists and audience, at times suggesting a vocal duel between a soprano and a tenor. Joel and Dean go back and forth soloing/comping versus head-on sparring improvisers with seamless changes in direction. They take Jules Styne's "I Fall in Love Too Easily" at a wistful ballad pace, filling the music with regrets and minor, lush harmonies. They close with "All the Things You Are," one of the most worn-out standards in the book, but altering rhythm and improvising the melody line from the first phrase, giving the tune new life.

On January 9, Jazz Duets: Live at the 2014 Twin Cities Jazz Festival goes live again at the Black Dog, a double pleasure for anyone fond of jazz guitar and the intimate collaboration of two of our local guitar heroes.

The Black Dog is located at 308 Prince Street (at Broadway) in St Paul's Lowertown; www.blackdogstpaul.com. Music begins at 7:30 pm.