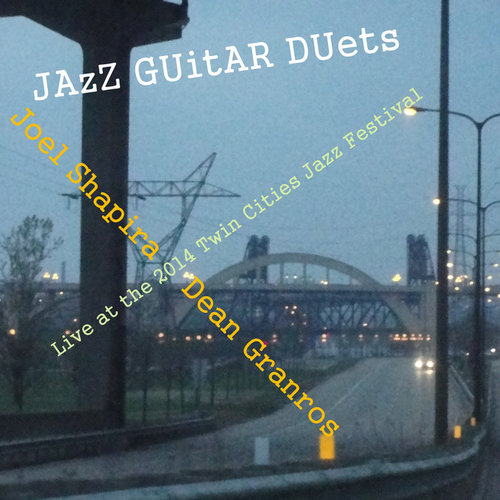 Duets
Joel Shapira and Dean Granros
Captured at the 2014 Twin Cities Jazz Festival, this recording showcases some of the most creative, adventurous and sensitive duo guitar playing heard in a long while.
12.00

Joel Shapira
Dean Granros
To purchase Duets, send Joel an email at joelshapira@msn.com and include the your name, shipping address, and each item you'd like to order. Then visit paypal.me/joelshapiramusic and enter your payment amount.

About a year ago, Twin Cities' guitarist Joel Shapira needed a stand-in for his New York-based partner Jack DeSalvo, who was unable to make the trek to Minnesota to celebrate their new recording, Inherence. For the CD release gig at the Black Dog, Shapira found a willing "sub" in Minnesota's own guitar guru, Dean Granros. The result was not a duplication of the Shapira-DeSalvo magic, but a new partnership, and a stunning one at that. Since that night, Shapira and Granros have furthered their collaboration, now captured as Jazz Duets: Live at the 2014 Twin Cities Jazz Festival (Art Bunker Recordings). No stand-in needed this time - Shapira and Granros will return to the Black Dog on January 9 (8 pm) to celebrate the CD release at its point of origin.